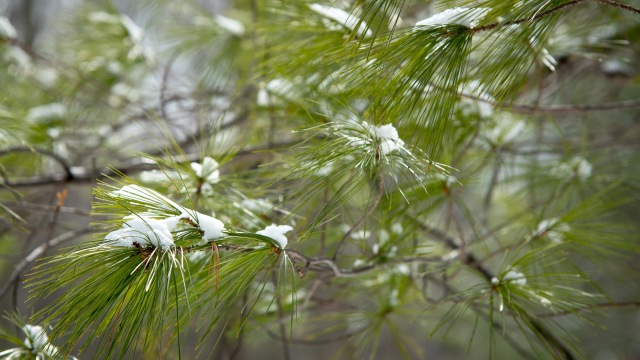 What was that old cliché?  Be careful what you ask for?  Everyone around me has been complaining and asking, “Where’s winter?”  Well…we found it.  Or, it has found us.  I may have mentioned that where I live, Christmas eve was nearly the same temperature as it was on July 4th.  We had a high of 68F (20C) on December 24th and a high of 69F (20.5C) on July Forth, but that has all changed.  Last night’s low was 5F (-14C).  That’s quite a change, and it came with a little bit of snow too.  Now everyone is complaining that it’s too cold.  Oh well, such is life. It reminds me of another old cliché…you can’t please everyone.

This shot is actually from last winter while I was out walking near my home.  It was a fun walk as I recall, with a little bit of snow crunching under my feet as I went along.  A light snow had fallen, and the wind was absent, so the snow still lie where it had fallen.  There was just a little snow on the branches of this pine tree, and I thought it made a great picture.  So, I did my best to capture the moment.  For my efforts, this was one of my favorite shots of the day, and I actually used it as the wall paper on my desktop for a while.  I hope you enjoy it as much as I do.

Speaking of wall papers and computers.  My old PC is showing signs of heading off to the great silicon valley in the sky, and I’ve been toying with going to the dark side. Yes, I’m thinking of getting a Mac.  There I said it.  I was in one of those notorious big box retailers over the weekend looking at those  gorgeous 5K retina displays. I actually went to my own website to see what it would look like  That felt weird, but I have to say, I was impressed.  (With the monitor not the website, well maybe a little with the website but anyway…) I kept my site up on the screen as I left.  Was that a bad thing?  Some gratuitous self promotion?  If you have an opinion (on the computers), I’d love to hear from you.  Have a great day.  Is it only Tuesday…?