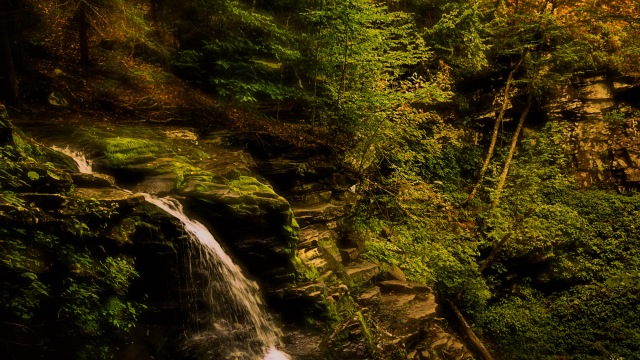 Well, it’s time for a little experimentation.  I have been fooling around with photoshop a little bit trying to create a “dreamscape” type of shot.  You might notice that some areas of this picture are kind of blurry, and some are in relatively crisp focus.  It’s an effect I’ve seen out there and I really like it.  Some would call it a painterly effect, but I don’t really think that’s what I’m going for.  I’m sure that if you asked 10 photographers how they achieve their unique effect, you’d get 11 different answers.  Mine involves Gaussian blur in one layer and a high pass filter effect for ultra crispness in another layer.  Then I used a layer mask to paint blurriness in.  I used a reduced flow brush to put more blur in some areas than others and believe me, lots and lots of use of the history tool to erase all kinds of mistakes.  Overall, I’m pretty ok with the end result, but I reserve the right to work a little more on the technique.  I’ve heard of photographers taking two different pictures to create this same effect.  Each picture set at a different aperture for a different depth of field, or two completely differently focused images.  This might be a great idea, however, I had no idea I was going to try that with this image when I took it; so I only had the one image to work with.  I’ve also heard of people using textures to achieve this effect.  Like I said, 10 photographers, 11 answers.  If you’ve ever tried this sort of thing let me know.  That is if you don’t mind sharing your secret sauce.

A quick note about this picture.  It is, of course, of a waterfall.  As I’ve said before, waterfalls are one of my favorite subjects.  I took this image at Rickets Glen State Park, which is a short drive from my home.  I’ve posted waterfall shots from this place before, and I have plenty more to share. There are a few dozen of them in the park.  It was late afternoon, and a really hot day.  Some friends of ours from the UK were with us, and we happily obliged them in a quick nature hike along a cool stream.  Later that evening, we roasted marshmallows and made them speak with American accents!!  It was awesome and hysterical!!!  Almost as funny as our British accents, that is!!